TOM Hafey, the football evangelist who coached Richmond to four premierships, used to say that a town that loses its footy team loses its heart. Tommy criss-crossed the country for many years, dropping in on hundreds of local clubs’ training sessions, checking the pulse of Australian rules football.

Tommy felt personally aggrieved when a local club was allowed to die, when the game he loved was no longer the glue that stuck communities together.

The greatest blessing in my life (besides my two daughters!) was that I grew up in the bosom of the Longford (Tas.) football club. Tom Hafey came to Longford several times over the years, and he’d be pleased with what is happening at the club now.  Like many country clubs around Australia, it’s trying hard to encourage local kids to get involved, and to be a vital part of the community. I ‘ve often cursed the club for failing to win premierships, and I’ve despaired when support for the tigers’ has run low, but my sense of belonging to Longford is so personal I’ve never made room in my heart to follow an AFL team. Professional clubs are big business operations – AFL might as well be AMP, and GWS could be BHP. But a local club is the grass roots; it belongs to the people.

Putting Longford’s 140 years into historical perspective, when the club was formed in June 1878, the Kelly Gang were robbing the Euroa pub, the telephone was being used for the first time, and the London suburb of Wimbledon had just staged its maiden tennis tournament.

In my first 20 years, I virtually lived on the Longford recreation ground. Our house was in the street nearest the ground, and I’d go home only when I needed to sleep and eat and have the occasional bath. There was hardly a day went by when we urchins weren’t at the ‘rec’, riding our bikes through the pine trees where the sports centre now stands, or catching tadpoles in the Back Creek, or playing kick-to-kick on the oval. The Longford footballers of the 1960s raised us – sometimes to the displeasure of our mothers. They taught us to spit, swear, chew gum and other dubious life skills. And even though the under-18 players back then were a decade older than us, they always made we ‘ankle-biters’ welcome at their pie nights. The Longford thirds, coached by Gerry Mahar, won the flag in 1964, and I love going to their reunions, catching up with lifelong friends such as Brian Armstrong, ‘Ginger’ Alderson, Peter Bowles and ‘Brick’ Murfett.  When you boil it all down, the mateships are what matter.  They’re the best bit of belonging to a club. Bonds between players were forged on freezing cold training nights, in fog as thick as pea soup, or on icy Saturday mornings when you had to kick the frost off the ground. The greater the discomfort, the more you urged each other on. I miss that sense of belonging.

When you look back on 140 years of the Longford football club, it’s the wonderful people you remember. Longford has had so many stalwarts who’ve given more to the club than the club could ever have given to them.  People like Madge Button, who ran the ladies committee for nearly 50 years, and her husband Vern, who was our timekeeper.  Club servants like Roy Burn, Geoff Murfett and Mick McCullagh, trainers ‘Beau’ Barnes and the irrepressible Tony Gibbons, and supporters  such as ‘Dutchy’ Pryor, Ken McWilliams, the Brazendale family, John Gray and Michael Saltmarsh and Miss Muriel Mather, a very private lady who raised over $20,000 for the club in the 1960s and ‘70s.

We’ve had our share of characters, too. Home games couldn’t start without the presence of Perc Gadsby, an old-timer who lived alone in a weather-beaten cottage at Blackwood Creek.  Every Saturday Perc would put his teeth in, hook up his hearing aid and head for the bright lights and dizzy heights of downtown Longford.  For 20 years that I know of, he stood at the back of the Tigers’ dressing room and yelled “goodonya Barry” (Lawrence) or “you tell ‘em, Ike” (Hayes) as the coach of the day delivered his pre-match address. As often as not, Perc confused the coach’s name with the previous year’s incumbent.  Once when, for some reason, the rival team changed in Longford’s rooms, Perc unwittingly yelled encouragement to the opposition’s coach.

We’ve had wonderful players. Among them Terry Cashion, who won the Tassie medal for best player at a national carnival, Hec Smith, Col Stokes, the marvellous teams of the Fred Davies era, the likes of John Fitzallen, Peter Jago, Paul Vinar, Barry and ‘Casey’ Lawrence, Mike Smart, David Berne, Mick Prewer, Roly Chugg, Lyndon Dakin and a spindly boy named Michael Roach. 16 year-old Michael booted five goals on debut in 1975, and the following week the Launceston full-back decided the only way to beat him was to knock him out. As soon as Michael was king-hit, Longford’s thirds coach ‘Sav’ Stone ran onto the Windsor Park playing surface and flattened the Launceston full-back.  Promptly, two coppers took off after ‘Sav’ in a Keystone Cops-style pursuit across the Tamar mudflats. ‘Sav’ eluded the law and Michael went on to give Longford fans two exciting seasons before he crossed to Richmond, where he starred in their 1980 premiership, topped the League goal-kicking, was chosen to represent Victoria and took one of the most memorable marks of the 20th century. 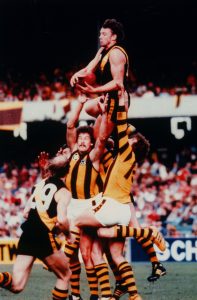 Reflecting on all the magnificent people who’ve contributed to the Longford football club, my overwhelming feeling is gratitude. The current committee is ensuring that the club remains at the heart of local life – it is giving our youth an opportunity to grow and excel, and to belong to a club that represents our community. May Longford’s heart, our footy club, continue to beat for another 140 years.