Five years ago, I was walking with my two daughters down Wellington Street in the Tasmanian town of Longford, when one of my girls sneaked away into a gallery. Unbeknown to me, she had spotted something she knew I’d treasure. Several months afterwards, my daughters gave me a surprise gift for a milestone birthday, and I can honestly say I hadn’t seen their eyes sparkle so much since Christmas Days when they believed in Santa Claus. The present they gave me was a David Lake painting of the old store on the corner of Wellington and Marlborough Streets, the heart of Longford. As you might have guessed, my daughters had heard me tell one or two stories over the years about the man who lived there – he was a guiding light in my childhood. The Longford-based artist David Lake has a talent for finding beauty in everyday settings, but this work really captured the niche that Preeces’ Corner Store holds in my psyche, and in the life of the town. That painting has pride of place in our home. 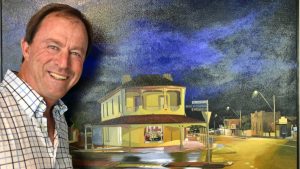 Roy Preece, the family grocer, passed away peacefully on the first Saturday in June, at the age of 86, but that iconic building will stand timelessly as a memorial to the man. I can picture Roy now, coming down his front step, grocery box in hand, hair slicked back, pencil over his right ear, laughing and chatting with everyone as he placed the box in the boot of a customer’s car. Or you’d see him standing under the veranda, broom in hand, yarning, ‘cos Roy liked a chat and people always loved chatting with him. Every weekday afternoon at four thirty we rolled off ‘Browny’ Spencer’s school bus outside Roy’s and he was always pleased to see us – and not just for the lollies he sold.  People always came away from a conversation with Roy feeling better about the world – though, admittedly, in those days Longford was our world. I recorded a conversation I had with Roy in Toosey last year, recalling his 54 years in the store. “There’s a family doctor, a family chemist….I was the family grocer,” he said. “Never forget, you don’t get respect – you earn it”.

Preece’s Corner Store belonged to the time when local stores were the glue that stuck communities together. With the incredible support of his wife Mavis, Roy was involved in many organisations – council, church, cricket club, and he was a part of Longford football club’s golden era. Coach Fred Davies rarely made a decision without seeking guidance from the man he called ‘Sec’.  Roy wouldn’t offer advice, but – if you asked – he always helped. You could pick up a lot of wisdom just by being around him, by seeing the respectful way he treated people, his integrity and decency, and how thoughtfully he related to all ages. When I was a young boy, I sneaked up to Roy’s some evenings to sit around and listen to the local youths, who treated the store as their drop-in centre. These were big lumps of lads – Barry and ‘Casey’ Lawrence, Walter Bye, the Jago boys – but they always maintained good manners. I never heard Roy swear. Even if he dropped a heavy box on his foot, the worst he’d say would be “jeepers creepers” or “by jingo” or “gosh” and – if he ever got upset – he’d say he was “doin’ his ‘nana”. Roy didn’t have a bad word for anyone and he was generous to a fault. I suspect there are still plenty of unpaid accounts at the Corner Store.

Throughout the 1960s Roy ran the Longford Baptist youth club, which was open to all kids from the district. Friday nights were for primary school ages, Saturday nights for high schoolers and Sunday nights for young adults. The activities were usually a mix of ball sports and parlour games, finishing with a campfire-style chat and sing-along. The parlour games were rather racy for the time – we played ‘postman’s knock’, a naïve version of blind date, where a boy or girl would be chosen to go outside into the darkness and supposedly kiss a mystery member of the opposite gender. It was scary fun. Roy’s group chats often started awkwardly and could be uncomfortable, but he gently encouraged us to open up about the matters that our parents couldn’t or didn’t discuss with us. Through fellowship we discovered that we weren’t alone in our struggles and that it was natural to feel insecure or frightened or lonely. Those sessions helped hundreds of young people to navigate the difficult years of adolescence and heaven only knows how many kids Roy saved from strife. The local cops should have given him a badge of honour.

But he could be a stickler. When ‘Casey’ Lawrence was on his deathbed at St Vincent’s in 1994, he invited some old friends to join him in prayer. Among the group was a Catholic priest, because ‘Casey’ had converted to Catholicism during his long battle with cancer. The priest led us in the Lord’s Prayer and ended it – as Catholics do – with the words “…deliver us from evil”. But Roy saw no reason to stop there. He carried on with the protestant version of the Lord’s Prayer, leading the rest of us as we mumbled through the remaining sentences. The Catholic priest seemed a little put out and I’ll never forget the look on Casey’s face as he rolled his big eyes towards me, as if to say: ‘Roy always gets the last word’. Roy did have the last word on ‘Casey’, who trusted him to deliver a beautiful ‘warts and all’ eulogy to a packed house in the Church of the Apostles.

Roy had an amazingly supportive partner in Mavis and their children Gaye and Craig are a reflection of their parents’ good values. The family lived above the store, so that busy corner really was their world. In later years, when Roy and Mavis retired to a home barely 200 metres from the store, they enjoyed going back to ‘Sticky Beaks’ for lunch, bathing in the camaraderie of family and friends, and being surrounded by so many wonderful memories. Roy loved the closeness of the Longford community.  We were talking one evening at the store and he commented how much the community had changed.  “You know, back when you were a boy, I knew everyone on the town,” he said.  “Now I’d be lucky if I knew three quarters”. I smiled to myself and thought that – where I live in Melbourne – most people don’t even know their neighbours. 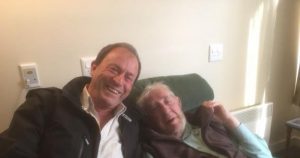 When I last visited Roy at Toosey Aged and Community Care centre a few months ago, he said he felt fortunate to have been ‘the family grocer’. I reminded him that he’d done more than sell groceries. To hundreds of people, make that thousands, of all ages and circumstances, he was a ray of sunshine, a mentor, a carer, an institution and – above all – a friend.

Thank you Roy, thank you.