It’s the hands you notice. Hands that have built yards, repaired fences, mended machinery, shoed horses, delivered foals and performed the thousand-and-one tasks a small-time horse trainer must do; jobs that can’t wait. Each swollen joint and scar on those gnarled fingers is a legacy of 38 years as a country trainer. Mrs Udyta Clarke is proud of her hands. They’re so distinctive that an artist acquaintance wants to draw them. The irepressible 70 year-old is tiny and petite, but her hands betray a lifetime of hard work. Mrs Clarke can fix anything. Her friends grimace at the places they find her – often she’s on the roof of a shed, repairing the guttering or replacing sheets of iron. Last week she manhandled a heavy battery to get her tractor going for the first time in a long while. She did that despite having a broken rib from being bumped by a horse on her 20ha property at Cardinia, an hour’s drive south-east of Melbourne. Last Wednesday a horse stood on her foot, leaving it “black and blue”. Two years ago she underwent a hip replacement and soon afterwards a knee replacement. Her friend and assistant, Julie Murray, gets tearful when she recalls the intensity of the pain that Udtya endured and how she stubbornly refused to stop working. Asking her to slow her down would be like trying to throw a halter on a runaway horse. Udyta’s German-born mother named her from a fairytale story – it means unique. With that foresight, her mum should have been a tipster.

Horse trainers are often eccentric, robust individuals – unlike the key players in other professional sports, trainers are untethered. But 70 year-old Mrs Clarke is something else. Her horses are the children she never had. She loves them unconditionally, the old ones, the slow ones and especially the injured ones. She never sells the horses that she owns. When they pass away, she buries them in the little graveyard on her property. She spends upwards of $100 a week on liquorice treats for her horses. No wonder equine dentist Brendon Cohen has a beaming smile when he comes to Poplar Park. “Her horses always look happy,” Cohen says. “But why wouldn’t they? – look how she treats them.” ‘Dyta’ (as she is known) is regarded affectionately by racing people, but she is very private. She shuns the limelight and has no time for racing’s social side. She often works 18-hour days, usually seven days a week. Her tiny office is in a corner of her stable block, within earshot of her small team of horses. Last week she fell asleep sitting on a chair and woke up flat out on the floor.

The favourite among her handful of horses is a six year-old with the stable name of ‘Caspa’. Dyta saved his life. When he was born he was cold and not breathing, so she blew into his nostrils and did chest compressions for 25 minutes until his heart started to respond. Caspa couldn’t stand for his first eight weeks and Dyta fed him every two hours through a tube. Named Heza Dude, he grew strong enough to win four races. Whenever she replays his victories on the dusty VHS player at her stables, tears well up in her eyes. He is special, but – in Dyta’s eyes – they’re all precious. Her training style is more carrot than stick – although, when her kiddies misbehave, she admonishes them gruffly. She never swears. Lately she’s been losing sleep over a five year-old she calls ‘Danny’. One night last week he was so restless she stayed in his stall until 3am, trying to settle him. She had to be up again at 4am to start her working day. Like Caspa, Danny had a difficult birth. Because the mare named Charmly produced no colostrum, Dyta bottled-reared Danny, who has become quite the creature of habit. He is always first onto the track, first fed and first into the paddock. He doesn’t go anywhere without Dyta or his stable companion, a 36 year-old pony named ‘Bicky’, who lives in the next stall.

Danny, aka Rich Charm, is making quite a name for himself. The gelding has won at six of his nine starts over the past year and is one of the favourites for the time-honoured Newmarket Handicap (1200m) this Saturday. The last time Dyta and Rich Charm went to Flemington, on Derby day four months ago, she almost took the horse home an hour before his race. Standing in Rich Charm’s race-day stall, she felt overwhelmed by the stature of the powerful thoroughbreds strolling around the parade ring. Compared to the passing parade, her homebred gelding is small, plain and humbly bred. Rich Charm was Dyta’s only horse at the carnival and her opposing trainers in the last race of the day boasted a ‘who’s who’ of horsemen – Hawkes, Snowden, Cummings, Hayes and Weir. Julie Murray convinced Dyta not to flee, reminding her that she’d cop a fine if she ‘did a runner’. Arm in arm, supporting each other, they tried to hide at the back of the mounting yard to watch the last race at 5.20pm. The pair stood motionless and stony silent as they stared anxiously at the race on Flemington’s big screen, until they started shaking and quivering when jockey Patrick Maloney swung wide on Rich Charm and flashed home for victory. Pundits rated it the most exciting win of the 2017 Cup carnival. Jason Richardson’s post-race interview was priceless – an hysterical trainer spilling forth a stream of consciousness. The two women were feted post-race, but they politely declined the champagne and quickly retreated to Rich Charm’s stall. They loaded the horse and pony onto the truck and, as always, Dyta took the wheel. After a tiring and emotional Derby day, they were in a hurry to get home and feed their horses. Dyta and Julie are also creatures of habit – on the way home from the races, they have a ritual of always stopping at the same roadhouse to buy a take-away hamburger and thick-shake.

Dyta spent her share of the winnings from Derby day on safety fences for some of her horse paddocks.

Before a major such as the Newmarket, trainers usually discuss tactics with their jockeys, but Dyta says she won’t give any advice to Patrick Maloney.

“Patrick knows what to do. He’ll use his own judgement – no point in me telling him what to do.” Maloney has ridden Rich Charm to his last six victories and the gelding will carry a relatively light impost on a track where he has recorded three wins. The Newmarket Handicap boasts prize-money of $1.25 million. For many trainers, success on Super Ssturday has been life-changing. Dyta protests it wouldn’t change her – at all. “What else would I do?” she asks. If Rich Charm wins the big race, she plans to build more fences. “They’re not cheap, fences, but the horses have to be safe. The children need to be secure.” Win or lose on Super Saturday, Dyta and Julie will stop on the way back to Cardinia for their usual hamburger and thick-shake… and they’ll load up on liquorice treats for the sweet tooths at home. 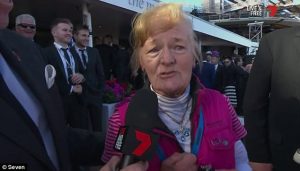