Fred Davies must have been a colossus of a man.

I can’t recall seeing ‘Mulga Fred’ in the flesh – I was five years-old when he died of cancer in the August of 1961.

But I do remember trying-on the football jumpers that he wore.

Fred’s son Ian and I were inseparable playmates and we often took his late father’s Longford and Carlton jumpers out of the glass cabinet and marvelled at the enormity of them.

Fred was a bricklayer and he built several houses on Longford during the 1950s, including the Pakenham Street home where the Davies family lived.

Before he came to Longford, he was vice-captain of the Carlton team that beat Essendon for the 1947 premiership. He kicked four goals and was one of the best afield. Carlton’s premiership ruckman of the 1960s and ‘70s, ‘Percy’ Jones, once told me how he felt overwhelmed to be allocated Davies’ old number, 28.

The premature death of ‘Mulga Fred’ was a devastating blow for Longford, especially so for his wife Joan and their two children, Helen and Ian.

But kids being kids, Ian and I cheerfully played on the Longford recreation ground in the early ‘60s, kicking a footy with other boys and jesting with the Longford players when they arrived for training. They were our heroes, among them several pairs of brothers – the Pitts, Armstrongs, Bowles and Lawrences.

In the darkness at the end of a training session, ‘Casey’ Lawrence would sometimes whisper to us kids to keep an eye on the ball as he roosted it over the fence into the gorse bushes, so we could retrieve it for ourselves next morning.

Because we saw our role models train hard and have fun, we believed from an early age that we were capable of anything in life – if we put our minds to it.

Ian was a shy, scrawny boy with a perpetually runny nose and his glasses had one eye covered by Band Aids to correct a congenital weakness. The Carlton number 28 jumper he wore every day had been washed so many times it was almost threadbare. He loved to play sport, and he was good at it.

On the afternoon before Longford met our despised enemy North Launceston in the 1963 NTFA grand final, The Examiner newspaper sent a photographer to Longford. He brought with him the young son of North captain-coach Bob Withers, hoping to set-up a picture with the son of the late Fred Davies.

But Ian couldn’t be found, so the photographer had to settle for a kid who lived within spitting distance of the recreation ground, which was me.

The caption beneath the front page picture on grand final morning said that Stephen Withers and I would be mascots for the big game, so mum took this literally, borrowed a couple of my schoolmates’ Longford jumpers and drove Ian and I to York Park.   Over 10,000 people thronged into the Park and we got lost in the crowd. In the minutes before the game we waited nervously outside the change-rooms, excited about leading the tigers onto the arena.   When the door flung open, we were stunned to see the frightening face of Bob Withers – we’d been waiting outside the wrong rooms! By the time we dashed to Longford’s dressing shed, our team had already run onto the ground.

Longford lost that grand final by the narrowest of margins, but the feeling amongst supporters was that we would extract revenge the following year.   Longford had a fabulous record at the time – we had played in eight of the previous eleven grand finals and had lost just 41 of the last 176 games.

Longford’s premiership celebrations were legendary. On premiership night ‘Mulga Fred’ would stand on the bar of the crowded Blenheim Inn and lead the chorus in a stirring rendition of ‘Old Shep’.

After Longford’s dominant era of the 1950s and the near misses of the early ‘60s, our supporters thought the glory days would soon return. Sadly, Longford hasn’t won an NTFA premiership since 1958, although we did top the amateur league in 1989.

Fred Davies was our town’s first and (so far) last NTFA premiership coach.

In the ‘60s the Longford recreation ground was a playground for local kids.

We raced our bikes through the pine trees, fished in the back creek and got filthy chasing each other around the paddock.

Northern Midlands Council will next year upgrade the recreation ground, and it’s a great thing to provide more sporting and social opportunities for the community. But the development includes the demolition of the old wooden ‘Mulga Fred’ Davies Memorial grandstand and I shudder at the thought of losing this tangible link with the club’s golden era. The grandstand is hardly an architectural gem, but it is dedicated to ‘Mulga Fred’ and it stands as a reminder of the time when our country town boasted the best football team in Tasmania.

Davies transformed a mob of mostly farm boys into an irresistible force, winning the NTFA premiership in 1955, the State premiership in 1957, and another NTFA title in 1958. In June of this year, the all-conquering 1957 team held its 60th anniversary reunion, and it was uplifting to hear ‘Ike’ Hayes, Ted Bricknell, Don Brooks and others reminisce about ‘Mulga Fred’.

Fred’s son Ian was a shy and modest student at Longford primary in the early ‘60s and mum Joan battled depression as she struggled to raise her two young children.

Joan’s sister had married an American and had moved to the U.S., and in March 1965 Joan decided to follow.   They flew out on the Tuesday after the motor racing long weekend. I remember Ian and I walking home from Newry corner after the races had ended on the Monday. Blaring through the loudspeakers was the ethereal voice of Judith Durham, singing The Seekers’ hit ‘The Carnival is Over’.

Ian and I wrote to each other for the next decade or so, until I went to the U.S. on a working trip in 1979. When I saw him again, he had grown into a super athlete, standing six foot six inches tall.   He had become an all-American basketball player at Galesburg University and starred for the Maine Lumberjacks in America’s second tier professional league. When I returned to Australia from that trip, I wrote a feature about Ian for a Melbourne newspaper and was contacted by the newly-formed Launceston City Casino basketball club. Ian promptly came home to play for the Launceston team and he was such a prolific scorer that – in its first season – the fledgling outfit won the national basketball championship.

Ian was chosen to represent Australia at two Olympic Games – Moscow in 1980 and Los Angeles in 1984. In Moscow he topped the scoring, not just for Australia, but for the entire basketball competition. His freakish performances and sportsmanship were recognised when he was inducted into the Australian basketball hall of fame.

The story of the shy little boy from Longford primary school who became an Olympian is not as well-known as it should be. This is an achievement that should be held up to inspire every local child who dreams of achieving greatness.

After Ian retired from basketball, he found it hard to settle. He was deeply affected by the loss of his father at such a young age.

Joan eventually returned to Australia, and her last wish was granted when her ashes were spread on the Longford recreation ground.

Ian died suddenly in November 2013, at the age of 57, and several national basketball legends came to his funeral in Hobart, where his childhood friends Peter Blackwell and I spoke about the little boy with the patch on his glasses who loved to play sport.

Now that the old, wooden ‘Mulga Fred Davies Memorial’ grandstand is to be demolished, Northern Midlands council has an opportunity for a more appropriate recognition of the Davies family’s historic contribution to the region.

My respectful suggestion to the councillors is for ‘the rec’ to be renamed the Davies Memorial recreation ground.

This would be a fitting tribute to the football leader who made Longford the proudest town in Tasmania and the son who grew up to represent our nation on the biggest sporting stage in the world.

Hopefully every young person who goes into the Davies Memorial recreation ground will be reminded that they too can achieve anything in life – if they put their mind to it. 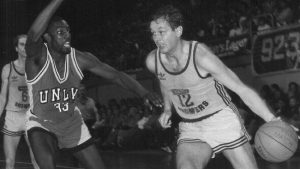